THE BATTLE OF ISSUS After crossing over from the Greek mainland at the Hellespont and defeating the Persians for the first time at the Battle of Granicus, Alexander went southwards throughout Ionia along the Mediteranian to free the Greek cities from Persian rule and to secure the coast of Asia Minor.

And in 333 BC, he and his folks met a persian army at Issus, in Asia Minor. Here is a picture of my "battle of Issus" showing the two armies clashing one against the other! Here is a map showing Alexander's conquest of Asia. You can see, on the top left, the location of Issus (in red) taken from Joseph Berrigan's excellent site on Alexander, from which most of this story is taken. http://joseph_berrigan.tripod.com/

He then turned northward to Gordium, home of the famous Gordian knot. The legend behind the ancient knot was that the man who could untie it was destined to rule the entire world. Alexander simply slashed the knot with his sword and unraveled it. 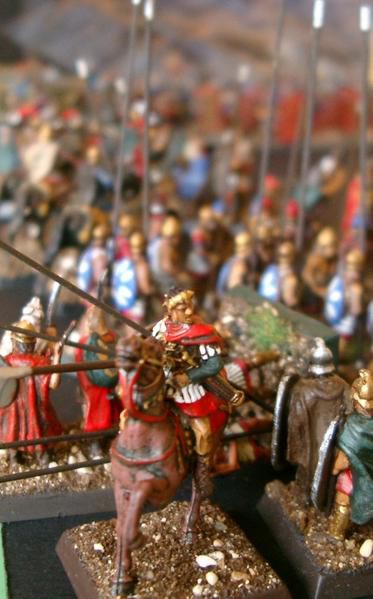 After leaving Gordium, he marched southwards again, into the Cicilic plains. He now formed a serious threat not only to Lybia but to the heart of the Persian empire. Darius knew that he had to come to action quickly. Darius slipped pass Alexander's army and positioned himself between Alexander and the Hellespont: Alexander would have serious problems with his supplies and there was no way back to Macedon. Alexander was surprised by this sudden movement but Darius had made a big mistake by positioning himself in a small area between the ocean and the mountains; he would never be able to utilize his immense army effectively. In November of 333 BC Alexander met Darius for a second time at a mountain pass at Issus. There ensued a furious battle necessitating frequent changes in tactics by both forces.

was easy to s