From Cyrus to Darius

The Fate of Persia The story of the rulers of Persia is a very long one, and not a peaceful one! But it's interesting to understand what Persia has beciome in the days of Darius III, when Alexander decided to put an end to the Achemenid ruling.

The Persian Empire took the place of the Kingdom of Elam, destoyed by the Assyrians. Achaemenes (681 BC) was a warrior chief and developped a great skil in training and organising troops: From him coms the name of the royal line of Achaemenian Kings. However, his son, Prince Teispes , the first whose history is clearly established, was so powerful he could hold an old Elamite stonghold and proclame himself "King of Anshan". At his death, his kingdom was divided in two parts. One of his son, Ariaramenes, was crowned "King of kings" and recieved the richest region, on the North. His other son, Cyrus was given the soutern one, but seized power and became in the end the "King of kings".

His son Cambyse married a median princess, who gave birth to Kurush, i.e. Cyrus. He should have been very skilled because, when the revolted Median king Astyages marched against him in the plain of Murghab, his soldiers surrended without battle to Cyrus and gave him their king. In return, Cyrus mixed the two armies in one and spared their capital.

The new army quickly proved its skillness by defeating the lydian king Croesus, trenched behind his capital, sardis high walls. Then Parthia, Bactria, Phoenicia and Babylonia. There he gained the eternal blessing of the jews, who were held here since the fall of Jerusalem.

Cambyses II, his son, was of the same temper. By his time, Persia conquered Egypt, one of the richest nation of the time, Lybia and minor cities of north africa. A mage seized power and proclamed himself Cambyses' Brother and new ruler of Persia. He tried to establish a religious power, and searched support from the medians. The persian oligarchy didn't stand it and prepared a rebelion, led by one of them, Darius, the general in command of Cambyses's Immortals (Elite guard troops). His spent the first seven years of his reign on the roads, killing wanabee-kings, deposing plotting governors, defeating rebellious armies and re-establishing persian rule.

An Indian campaign between 520 and 515 B.C. helped him adding north west India to his empire. He failed to add a new kingdom to his empire in Scythia, but his general Megabazus conquered most of Thrace. Even Alexander, king of Macedonia, had to treat with him...

But in 498 B.C. Asia Minor rebelled against Persian rule. Greek forces sacked the city of Sardis, leading in their revolt Caria and the Greek towns of Cyprus. Persia won the war and in 492 B.C. his general Mardonius sets sail for Athens to avenge their support to the rebellious ionian of Asia Minor. They landed at Marathon and face the Athenian forces. But Greek wings overcomes the Persian ones and Darius army routed. From 486 B.C., his son and successor,Xerxes, proved his interest for Greece. He defeated the Spartans at Thermopylae, sacks Athens but was defeated at Platea and Salamis. His heirs were not of his teòper . Artaxerxes I, and Xerxes II were poor rulers. His followers, Darius II and Artaxerxes II were not better. His son Artaxerxes III , who came to power in 358 B.C. was an able leader. His reconquered Egypt in 343 B.C. and pacified Asia Minor. But he died in 336 B.C.
to be replaced by Darius III, the same year Alexander became king of Macedonia. 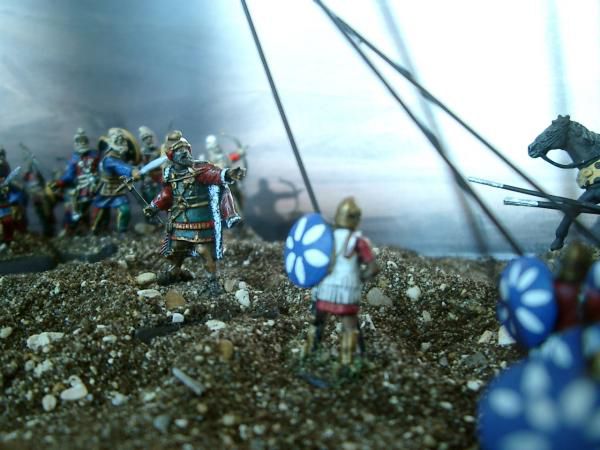 Darius didn't know, but 336 BC was the fate of the persian empire.