Connexion + Créer mon blog
The battle of Granicus, 334 BC.

When Alexander succeeded to the throne of Macedon after the murder of his father Philip, he inherited a kingdom which had just come to dominate the affairs of mainland Greece. The position of Alexander was instable at first, but he reinforced it with a successful expedition against Thracian tribes at the Donau. Subsequently he was recognized as the leader of the Corinthian League after he had ended a revolt in Hellas by taking Thebes of the map. Now the time had come to fulful Philips of a combined attack of Hellas and Macedon on the Persians to punish them for their violent deeds 150 years earlier. Not much had changed in the Persian army. They still had massive numbers of cavalry and archers. One thing that they had learned of the Persian wars was that the Greek hoplite was absolutly superior to the Persian infantery. Luckily for them was the beginning of the fourth century the time of mercenaries, and many Greeks were willing to serve in a foreign army as long as they got their share of the booty. The experienced Greek phalanx combined with the motivated Persian cavalry made the Persian army not only a huge army, but also a fearsome army. 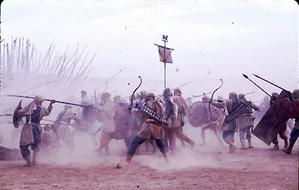 The Macedonian army also used lots of mercenaries. The biggest problem with mercenaries was their morale, and that they did not a shared goal besides money. An army that only consisted of citizens always had ideals, and because of these ideals was the morale often high. Alexander managed to keep his army together thanks to his leadership, but most of all because of his bravery.

Alexanders forces were very experienced, and many of them can be seen as elite units. This is characteristic for the armies of Alexander as he always used many elite units as they could form an agema. Agema was the Greek word for 'that, what is being led', but the Macedonians changed its meaning into 'that what leads'. When you know this it is not surprising that an agema was the spearhead of an army. There several agemas in his army: one for the hysapists, one for the royal cavalry, one for the light cavalry, etcetera. But Alexander did not only use hysapists and cavalry: we also hear of archers, peltasts, hoplites, engineers, slingers, and javelin-throwers. His army was versatile and very mobile.

Unfortunately we know very little of the satraps who decided to wait for Alexander with an army. They had played an insignificant role in history until then. About Alexander we know much more, but not only because of his impressive achievements. Alexander was only twenty when his father was murdered, but young Alexander was already prepared for the duty which was waiting for him. At the age of sixteen he had already led an army against Thracian tribes when his father was away, and he even destroyed their capitol. During the battle of Chaeronea he was in command of the decissive blow against the 'Devoted Brothers in Arms'. And after his fathers death he showed once again that he was the leader Macedon had been waiting for.

As a commander Alexander did not only have a lot of knowledge, but he also dared to improvise on critical moments. During an expedition against Thracian tribes the Thracians attempted to crush his troops by pushing wagons down a hill. Alexander quickly opened his formation so that the wagons could go through, and were this was not possible he ordered his man to lay down on the ground with their shields on their back. There were no Macedonian casualities. On another occassion he crossed the Donau much earlier than expected by confiscating all local ships for the transport of his troops.

He was not only a splendid commander, but he also tried to be a Greek as much as possible. During his youth he had been taught be the great Greek philosopher Aristotle, and everybody knew that Alexander was fascinated by the Greek culture, and especially the books of Homer. At the end he no longer wanted to be just a Greek as he claimed to be a Greek god, a son on Zeus. That is why it seems weird that he started to wear Persian clothes after the defeat of the Persian empire. His admiration for the Greek culture was genuine, while his orientalism was most likely more because of political reasons... in an attempt to unite a massive empire.

It was not the only dualism in the character of Alexander. He was strong enough to survive any difficulty, and brave enough to always fight in the front of a battle, but also weak enough to drink too much alcohol which made him commit acts of brutality. At a certain moment he was drunk once more and murdered his old friend Clitus, while he ordered to burn Persepolis on another occassion even though he wanted to unite the old Persian empire under his leadership. He treated Darius' with all the possible respect, but he also killed all survivors of Tyrus, Gaza, and Thebes. We know of all this, but we are unable to explain these actions of Alexander.

Phase one: entering the Persian empire.

After Alexander had crossed the Hellespont with his army his first concern was to secure the coast of the Aegean. If he failed to do this very quickly then there was the danger that the Persian fleet might sail out an attack Macedon which was rather vulnerable now. However, he could impossibly go further south with the army of the Persian satraps to the east of him. They could attack him in the side, or wait till he had passed by and attack him in the back after they had cut him off his supplies.

Alexander moved his army along the southern coast of the Hellespont and sent several scouts ahead of his army. The usage of scouts had often been neglected by Greek commanders, it would have prevented the Athenian defeat at Aegospotamoi for example, but Alexander had been taught very well and he knew exactly what he was doing. The scouts came back after they had located the Persian army and reported that it was most likely the same size as the Macedonian army, but they had fewer footsoldiers.

River Granicus as it looks today The Persian cavalry had already reached the river Granicus before Alexander could cross it. The Persians had installed them on the higher side of the riverbanks, and waited for the slower phalanx to reinforce their position. Several of Alexanders commanders wanted to wait and see what would happen, but Alexander wanted to attack immedeatly before the Greek mercenaries would join up with the Persian cavalry on the riverbanks. Again Alexander sent out his scouts and they found several places where the river could be crossed.

The first to attack were his light cavalry and troops on his right wing. The Persian attacked them from the high riverbanks with javelins and arrows while they were crossing the river, but even the light cavalry was well armoured so there were not many casualities. Alexander had ordered his forces to cross the Granicus under an angle, so that the stream pushed them forwards. This way they were able to cross the river quite fast, but it also was very hard for the Persians to anticipate where they would land. The light cavalry and infantry landed at a place with lower riverbanks, and they were immedeatly attacked by the light Persian cavalry.

Alexander saw that his troops were having a hard time on the other side of the river, and that many of them were killed. Immedeatly he crossed the river with his heavy cavalry, and attacked at the same place. He let the Persian light cavalry to his troops who had first crossed the Granicus, and attacked the Persain heavy cavalry himself. The Macedonian cavalry had an advantage over the Persians as they used long spears, instead of short javelins as most Persians did. On the other hand had the Persians their scimitars, and Alexander was even almost killed by one of them.

Alexander manages to break through the Persian formation which was commanded by the satrap Spithridates. Now the Persian light cavalry on the left wing has no longer the support of the heavy cavalry and they can no longer withstand the furious Macedonian attacks. They flee, while the hysapists also cross the Granicus and attack Spithridates and his heavy cavalry. A man-to-man fight starts on the riverbanks between the hysapists and the Persian heavy cavalry. Spithridates is killed during this fight, and the position for the Persian becomes even more hopeless when Alexander himself threatens to attack them in the rear. The Persian formation breaks again in that area, and suddenly every Persian is running for his life.

Once more Alexander charges forward together with his elite heavy cavalry and pins down the advancing Greek mercenaries who had now reached a small hill. The rest of the Macedonian army had now also crossed the Granicus and the light cavalry and infantry were hunting down the fleeing enemy while the Macedonian phalanx and hysapists were moving towards the hill. The light infantry and archers who had been accompanying the Greek phalanx are forced to retreat together with half of the phalanx, while the rest of the phalanx is encircled on the hill by the Macedonian phalanx and hysapists. Alexander refuses to accept the surrender of these Greek 'traitors' as he is determined to set an example. When 2000 of them are left he ends the battle, captures them, and sends them to Macedon where they have to pay for their treachery by hard labour.

The results of the battle.

The "aftermath"... of the shooting of the film Alexander The Great Memnon, one of the commanders of the Greek mercenaries, had survived the battle as he had not participated in it. The Persians no longer trusted him after he had told them that it was not wise to force Alexander into a battle at the Granicus. He wanted to avoid a direct battle, combined with the tactics of the scorched earth. At the same time all naval bases at the Aegean had to be reinforced, and Alexander had to be cut off from the sea, and thus his supplies. Darius had much faith in Memnon when he heard of his plans, and gave Memnon orders to realize his plans.

Nevertheless managed Alexander to take many coastal places without much effort, and he also dominated the important road to Sardes. Milete refused to let Alexander inside the walls in the hope that the Phoenician and Cypriotic ships in Mycale would help. Alexander took the city before any help had arrived at the battlefield. Memnon retreated to Halikarnassos and reinforced it immensly. Again Alexander managed to take this city and now Memnon was forced to retreat to islands in the Aegean. Here he created several bases which not only formed a threat for the side of Alexanders army, but they were also meant for a counterattack on Macedon and Hellas. Unfortunately for the Persians he died because of a disease before this attack was launched.

The successors of Memnon continued his strategy for some time, but they realised that an attack on Macedon or Hellas was useless after Antipater, who was governor of Macedon during Alexanders absence, had shown his power. The battle against Alexander would be continued inside the Persian empire instead of in Macedon...