Gaugamela is the name of one of the greatest battles in history, resulting in the decisive victory of Alexander of Macedon over the last Achaemenid Emperor, Darius III (qq.v.) on 1 October 331 B.C.E. 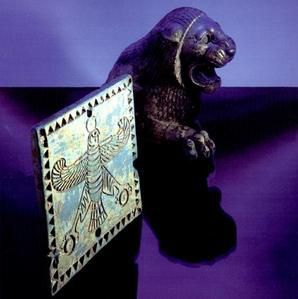 The exact location, about 60 miles from Arbela (q.v.), after which the battle was often named, cannot be recovered. Speculation based on modern toponymy (as in Schachermeyr) is unhelpful. The sources seem to place it south of Jabal Maqlûb (ca. 1050 m), near the low range of ´Ayn-al-Safrâ`, by the Jomel River, east of Mosul, around Kermales and Qaraqoš. A site north of Maqlûb near Tell Jomel, often suggested, probably involves having Alexander attack with the sun in his eyes (Schachermeyr alone realizes this, but he accepts it).


In summer 331 Alexander moved east from Tyre, while Darius, leading the levy of the central and eastern satrapies, moved north from Babylon through Arbela, to a wide plain that he completely flattened in order to give his scythed chariots and his cavalry a decisive advantage. Some of his forces were equipped with Macedonian-style sarissae (as we see them on the Alexander Mosaic) and long swords (Diodorus, 17.53.1). The numbers in our sources—from 40,000 to 200,000 cavalry and from 200,000 to 1 million infantry—are worthless, but his excellent central and eastern Iranian cavalry, reinforced by allied Iranian Saka cataphracts (Arrian, 3.13.4), must have considerably outnumbered Alexander's 7,000 (Arrian, 3.12.5) and could hope to envelop and destroy them. His infantry, whatever their numbers, could not hope to resist the phalanx, except for a few Greek mercenaries stationed near Darius. Alexander crossed the Euphrates at Thapsacus (near Jarâblos). Mazaeus had been detailed with a small force to observe him and perhaps to steer him towards Darius, who wanted a battle on his terrain. He dispatched "deserters" to tell him Alexander's position and tried to harass him by burning villages and food supplies, but had his instructions not to oppose the river crossings. Alexander moved northeast to cross the Tigris near Mosul, then rested his troops. On 20 September a lunar eclipse occurred and was interpreted to foretell Darius' defeat. Alexander moved forward, again rested his troops and fortified a base camp. On 30 September, coming within sight of Darius, he spent the day reconnoitering, keeping the enemy alert through the day and awake through the night. Darius had locked himself into a perfect defensive position, leaving the tactical advantage to a master tactician. 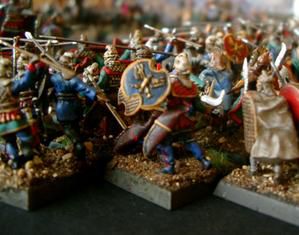 Our sources have obscured details of the battle. Arrian's account is unsatisfactory, and Curtius and Diodorus, based on the dramatizing "Alexander vulgate," are confused and cannot confidently be used to supplement Arrian. Some basic facts are clear. Darius commanded from the center and his cavalry overlapped Alexander's line on both wings. Alexander, as usual, was stationed on the right with the Macedonian cavalry; the phalanx held the center and Parmenio, with the Greek (especially Thessalian) cavalry, commanded the left. There were flank guards on both wings and, to guard against encirclement, Alexander had drastically shortened his front by setting up a second line of infantry. Alexander moved obliquely to the right, threatening to leave the prepared battlefield and to outflank Darius' left. Darius launched his scythed chariots, which the Macedonians were drilled to deal with, and sent his best cavalry to the left. This created a gap near his center. A wedge of Macedonian cavalry poured through it, while the phalanx attacked frontally, both making for Darius and throwing his guards into confusion. In serious personal danger (though the report that Alexander came close to him, as shown in the Alexander Mosaic, is fictitious), he was persuaded to flee to save his kingdom. As Alexander pursued, gaps developed in the Macedonian line in the center and on the left. Persian and Indian troops penetrated to the field camp behind the line, but they plundered it instead of turning on the enemy. Alexander, chiefly concerned to capture Darius, pursued the king until nightfall, leaving Parmenio to hold his part of the line as best he could. Parmenio is said to have sent an appeal for aid to Alexander, but whether it ever reached him, and if so, whether he acted on it, is uncertain. However, as the news of Darius' flight (at the time perhaps a rumor of his death) reached the successful Persian right, they could only try to fight their way back, with the Thessalian cavalry cutting them down. The remains of the Persian left were caught by Alexander and his cavalry on their return from the unsuccessful pursuit of Darius. There followed perhaps the fiercest fighting of the whole battle, but in the end the Persians were killed or dispersed. The last Achaemenid army had disintegrated. Darius, with a small force, fled to Ecbatana, abandoning his other capitals to the victor. Mazaeus, who had commanded the Persian right, fled to Babylon. Twenty days after the battle, he surrendered it to Alexander, who appointed him its satrap. By January 330, Alexander had taken Persepolis and savagely burnt it down after looting the palaces. Studies:
(a) All biographies of Alexander deal with Gaugamela. Among recent ones the following are worth mentioning:
(b) Special discussions:
*** Note: This article is originated from CAIS at SOAS (http://www.cais-soas.com); copyright © CAIS at SOAS.